"My fingers are itching, I would love to start next week." Time capsule embedded at the Max Planck Center for Physics and Medicine

The next step in the construction of a special large-scale project has been taken: after the foundation stone was laid in 2021, employees of the partners involved embedded a time capsule in the concrete floor of the new Max-Planck-Zentrum für Physik und Medizin (MPZPM). The capsule was embedded in a 25-centimeter-deep concrete layer, which will now be followed by another layer of the same depth. 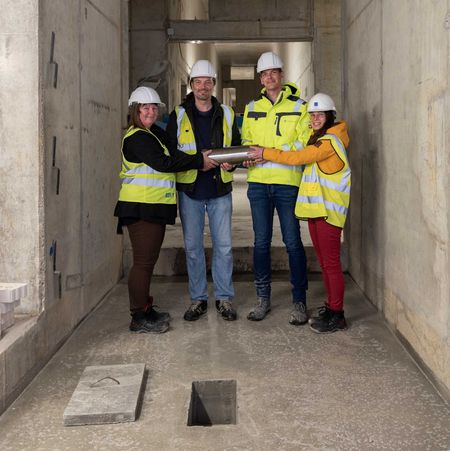 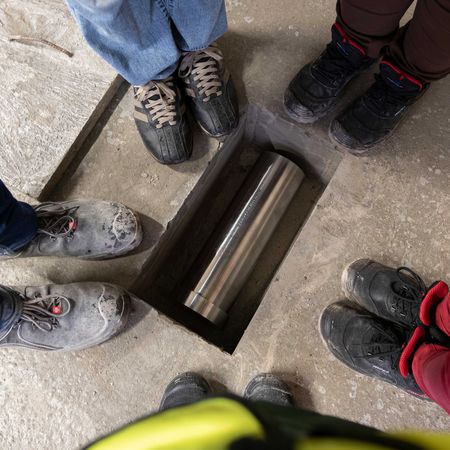 For Prof. Kristian Franze, the anticipation is palpable. "My fingers are itching, I would love to start next week," he explains. Especially since many things are already visible inside the building, for example where the individual research areas will later be located. Kristian Franze, who comes from the Friedrich Alexander University (FAU) and is one of the directors of the new Max Planck Center, was able to get a good impression of this during the tour. He was accompanied by Dr. Dorothe Burggraf, who heads the administrative department and infrastructure at the Max Planck Institute for the Science of Light (MPL), as well as Adrian Thoma, the responsible construction coordinator at the institute, and Katharina Kißner, the science coordinator at MPL.

The time capsule, which was produced in the MPL's mechanics workshop and filled at the cornerstone ceremony in 2021, contains, among other things, the MPZPM's "birth certificate" and "marriage certificate." These are, on the one hand, the concept paper with which Prof. Vahid Sandoghdar, spokesman of the MPZPM and director at the MPL, laid down the idea of the new research center in 2013 and, on the other hand, the cooperation agreement between FAU, the Erlangen University Hospital and the Max Planck Society. Scientific artifacts are also part of the content, such as a lens of an iScat microscope, the kind of microscope that, among other things, made the corona virus visible for the first time. Finally, Dorothe Burggraf inserted a current issue of the Erlanger Nachrichten.

The staff of the MPZPM are still scattered all over Erlangen, but they are scheduled to move into the new building on the grounds of the University Hospital in early 2024. Once completed, the 5700 square meters of modern laboratories and offices will accommodate around 180 employees. The researchers of the three cooperation partners who will come together in the MPZPM will use modern mathematical and physical methods to give new impetus to the biomedical disciplines. They will conduct their research in close proximity to the physicians in the clinics.

(1) Prof. Kristian Franze, Dr. Dorothe Burggraf, Adrian Thoma and Katharina Kißner are gathered around the MPZPM time capsule before it is lowered into the concrete.

(2) The time capsule with its many artifacts is lowered into 25 centimeters of concrete, which will be followed by another layer to cover it up.