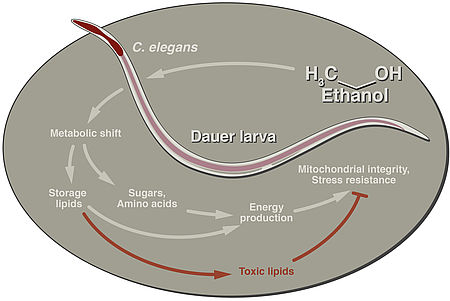 Alcohol triggers a metabolic switch in the worm which reshapes the metabolic network of the larvae. The ethanol is channelled into replenishing storages of lipids, producing amino acids and sugars. (Image: Sider Penkov/TU Dresden)

Organisms often react to extreme environmental conditions with defence mechanisms which allow them to survive. Understanding these mechanisms may lead to new approaches for extending the life of human cells. In a work recently published in the journal Aging Cell, a team of researchers from FAU, the Max Planck Institute of Molecular Cell Biology and Genetics (MPI-CBG) in Dresden and the TU Dresden together with the Max Planck Centre for Physics and Medicine (MPZPM) in Erlangen discovered that alcohol can double the lifespan of nematode larvae.

There are up to 40,000 different species of nematodes, or roundworms, living in soil around the globe. The worm Caenorhabditis elegans (C.elegans), which serves as a model organism for biology research, can adjust its development in response to a lack of food, over-population or extreme temperatures. They become what is known as dauer larvae, a special type of non-feeding larvae which remains shut off from the surrounding environment and can survive approximately four weeks without food. For a long time, biologists believed that the dauer larvae were a closed system which scarcely exchanged any material with the surrounding environment. By chance, however, the team of researchers discovered that dauer larvae which were kept in an alcoholic solution survived much longer than those which were not.

The research group led by Prof. Dr. Teymuras Kurzchalia from the MPI-CBG discovered that the worms are able to soak up and metabolise alcohol from their environment. Alcohol activates a switch which reshapes the larvae’s metabolic network, channelling the ethanol into replenishing storages of lipids, thereby producing amino acids and sugars and eventually providing energy for the worm. Furthermore, larvae supplied with alcohol gained the ability to survive desiccation by producing extra amounts of the sugar trehalose.

Why do the larvae still die?

In spite of alcohol as a virtually infinite source of energy– in nature, ethanol could be produced by yeast and bacteria in rotting fruit and plant stems – the worms do live longer, but still die eventually. Why?
In order to answer this question, the Kurzchalia group approached Prof. Dr. Vasily Zaburdaev and his team from the Chair of Mathematics in Life Sciences at FAU and the MPZPM. They developed a mathematical model of the metabolic pathway of dauer larvae. With its help the lifespans of worms could be predicted for various ethanol concentrations and possible mutations in the metabolic pathway. Based on the model, the team concluded that the mechanism responsible for the death of worms in spite of plentiful energy resources was the accumulation of toxic compounds.

In future, the researchers want to identify these toxic compounds and try to mitigate their effect in order to further extend the worms’ lifespan.
Learning and understanding mechanisms of survival and stress tolerance that later can be used to preserve life of human cells is the goal of the interdisciplinary project involving four groups in Erlangen and Dresden and funded by the ‘Life?’ initiative of the Volkswagen Foundation.