Florian Marquardt in the podcast of "Welt der Physik" 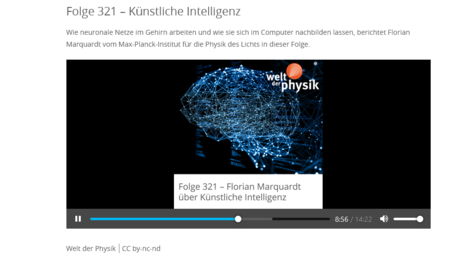 The podcast of the German magazine "Welt der Physik" (World of Physics) interviewed the Director of our Theory Division, Florian Marquardt, for an episode about Artificial Intelligence. He explains how researchers are using the human brain as a model to develop artificial intelligence with the help of computers.

Computers have revolutionised our everyday lives. They can process large amounts of data and do so very precisely. But although computing power has grown impressively over the past decades, humans are still clearly superior to computers in some areas.

Florian Marquardt says: "The human brain is very good at combining empirical values into a decision - even in situations that are fraught with uncertainty. These are typically things where a normal algorithm on a computer would be terribly complicated."

But how does our brain manage to make decisions? The neurons play an important role. What they do and how the understanding of the brain can help to build an artificial intelligence, is explained by Florian Marquardt in the German-language podcast episode.