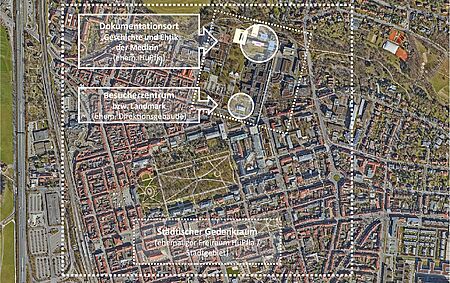 During National Socialism in Germany, crimes against humanity, especially medical crimes, also occurred in Erlangen. In order to commemorate the victims appropriately, the municipality's city council unanimously commissioned the administration to create a place of remembrance in 2015. In the meantime, a framework concept has been developed, and the city aims to directly involve the citizens in its implementation. To this end, it has created the forum Erinnerungs- und Zukunftsort Heil- und Pflegeanstalt Erlangen. The Max Planck Institute for the Science of Light is also represented by Directors Vahid Sandoghdar and Jochen Guck.

This form of public participation results from the passionate and constructive debates that have recently taken place about the partial demolition of the historic sanatorium and nursing home in Erlangen, known as HuPfla. Sections of the side wings give way to new buildings, for example for the new Max-Planck-Zentrum für Physik und Medizin, as well as several other buildings for research groups of the Universitätsklinikum Erlangen. According to Lord Mayor Florian Janik at the inaugural meeting of the forum last Wednesday evening, the city has had positive experience with such forums in other projects. The members come from various social groups and institutions. The forum also includes randomly selected citizens from the city.

"We actively support the creation of a place of remembrance and are therefore glad to get involved in the forum," emphasizes MPL Director Sandoghdar, who is also the spokesperson for the Max Planck Zentrum. He is very pleased with the discussion culture of the past years in the citizenry about the future of the Hupfla, which finally resulted in the framework concept (PDF, in German) presented last year. Its authors, memorial expert Jörg Skriebeleit, director of the Flossenbürg concentration camp memorial, and his colleague Julius Scharnetzky, go far beyond the HuPfla building in their proposals and include almost the entire city centre in their considerations for remembering the victims, but also the perpetrators. And they not only look back, but also forward, for example by suggesting that learning and educational opportunities be developed for health professionals as well as for the general public. Opportunities for research in History of Medicine or Disability Studies are also to be created.

The forum is to be involved in the deepening and implementation of this framework concept, for example in the launching of urban planning competitions. The next meeting will be in July, and at least two meetings are planned per year.

At the same time, the city is working on creating a sponsorship for the planned „Erinnerungs- und Zukunftsort“ ("Place of Remembrance and Future"), as the authors of the framework concept call it, reported Mayor Janik. He prefers a special-purpose association in which the city, the Friedrich-Alexander University Erlangen-Nürnberg, the Universitätsklinikum Erlangen, the districts of Central Franconia and Upper Franconia, the district hospitals of Central Franconia and the Free State of Bavaria join forces. He expects an agreement on such a sponsorship to be reached by the beginning of 2022. And he told that the state had promised to support the project financially.