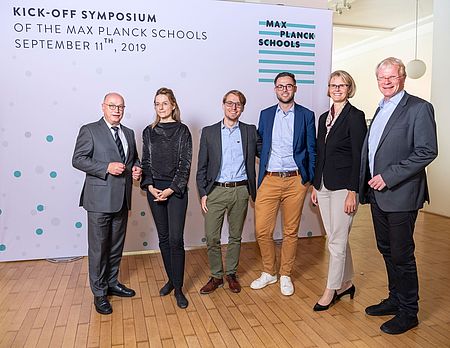 Meeting of students and heads of Max Planck Schools

To mark the start of the first students’ cohort and to officially welcome them, the Max Planck Society and the German Rectors' Conference invited all students, representatives of partner organizations and supporters to a Symposium at the Harnack House on September 11th. Also present were Federal Research Minister Anja Karliczek, Max Planck President Martin Stratmann and the President of the German Rectors' Conference Peter-André Alt.

Together with Ferdi Schüth, vice president of the Max Planck Society and driving force behind the project, three students discussed what science means to them and what social challenges they are motivated by. Nobel Laureate and Fellow of the Max Planck School Matter to Life and Photonics, Stefan Hell, gave a clear message to the students at the opening ceremony: "Stay grounded and reach for the stars!"

The selected doctoral candidates themselves made it clear why they applied to the Max Planck Schools: "For me, good equipment, a strong scientific network and the combination of theory and experiment were important," said Karl Michael Ziems, who is starting his doctorate at the Max Planck School of Photonics. In the USA or Great Britain, excellent research institutions are often concentrated in one city or one location. The idea of bundling the excellence distributed in Germany would achieve precisely this concentration.

As different as the topics of the Schools are, as different are the qualification paths, which ultimately all lead to the doctorate. Interested students at the Max Planck School of Photonics can choose between two tracks depending on their pre-qualification: a five-year direct track with integrated Master's degree or a three-year PhD track. The following applies to all candidates: When they are admitted to a Max Planck School, they receive financial support of up to five years - depending on the path they follow.

Combining distributed research excellence under one roof is the basic idea behind the Max Planck Schools, which were founded in 2017 by Federal Research Minister Johanna Wanka, Martin Stratmann and Horst Hippler, President of the German Rectors' Conference. In the mean time, 27 universities and more than 30 institutes of non-university research institutions are participating in the initiative. The main partners, who thus play a prominent role in the initiative, are the Friedrich Alexander University Erlangen-Nuremberg, the Friedrich Schiller University Jena, the Georg August University Göttingen, the Humboldt University Berlin, the Karlsruhe Institute of Technology, the Technical University Munich as well as the universities of Düsseldorf, Heidelberg and Leipzig, the DWI Aachen, the Fraunhofer Society and the Max Planck Society. The Federal Ministry of Education and Research is funding the initiative with 45 million euros.