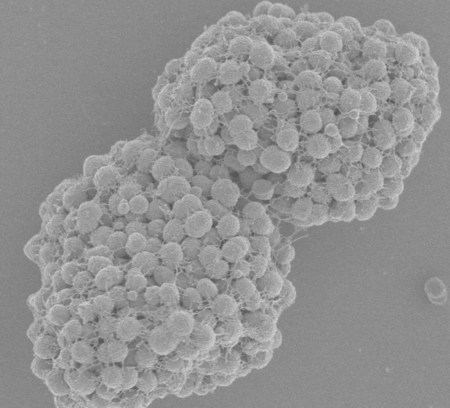 Disease-causing microbes as well as cancer cells gang together to form larger structures - and only then become dangerous to humans. Scientists at the Friedrich-Alexander-Universität Erlangen-Nürnberg, the Max-Planck-Zentrum für Physik und Medizin in Erlangen and the Max Planck Institute for the Physics of Complex Systems in Dresden have now presented a new mathematical model in the renowned journal Physical Review Letters that describes this process. And thus helps to find new approaches in the fight against infections and tumours.

It can be observed every time you take a shower: Small droplets of water join together to form larger and larger drops - until they are so heavy that they run down the wall. Scientists call this daily-life phenomenon coalescence - which surprisingly also provides the key to understanding how bacteria form colonies. Researchers at the Friedrich-Alexander-Universität Erlangen-Nürnberg (FAU), the Max-Planck-Zentrum für Physik und Medizin (MPZPM) in Erlangen and the Max Planck Institute for the Physics of Complex Systems in Dresden (MPI-PKS) have now succeeded in developing a statistical model to describe the formation, dynamics and mechanics of such cell assemblies. They have published their results in the prestigious journal Physical Review Letters.

When bacteria conquer new territories, one of their first tasks is to join together and form microscopic colonies. Within these communities, the microorganisms are better protected against forces, antibiotics and other negative influences than single individuals - and thus more dangerous for humans and other organisms. This also applies to gonococci (Neisseria gonorrhoeae), which form spherical cell clusters on human (mucus) skin within hours, consisting of several thousand single-celled organisms. These structures are the actual pathogenic units, the cause of the world's second most common sexually transmitted disease, gonorrhoea.

Like many other bacteria, N. gonorrhoeae has long, mobile, thread-like extensions. They use these pili to cling to surfaces and move around. The appendages also interact with each other and actively link together to form colonies. Seen under the microscope, this process resembles the coalescence of water droplets.

In a joint project led by postdoc Dr Hui-Shun Kuan (FAU), former PhD student Wolfram Pönisch (now a postdoc at the University of Cambridge), Professor Frank Jülicher (MPI-PKS) and Professor Vasily Zaburdaev, holder of the Chair of Mathematics in the Life Sciences at FAU and member of the Scientific Board of the MPZPM, have developed a theory to describe these processes using methods from statistical physics. As the starting point of their model, they use the forces exerted between the bacteria via the pili. In this way, they succeeded in mathematically reconstructing the development of colonies. The process is analogous to the condensation of a liquid or the separation of two phases, such as water and oil. When the number of microbes per unit area exceeds a certain limit, they spontaneously join together and form a dense drop surrounded by only a few individual cells.

These cell droplets are viscoelastic: they react elastically to rapid deformation and move like a viscous fluid over longer periods of time. The respective behaviour they exhibit depends on whether the network of interwoven pili has enough time to rearrange itself. The researchers' model shows the central role these thread-like projections play in the for-mation of colonies and how they determine their mechanical properties.

The findings can be generalised and also used to describe the mechanics and dynamics of dense cell assemblies such as solid tumours or tissue. The theory can thus help doctors to identify potential targets to slow down or even stop the formation of bacterial colonies or tumours with new active substances. 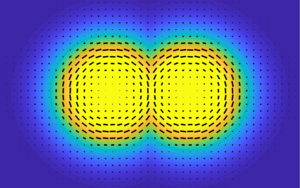 Researchers from Erlangen and Dresden have now succeeded in describing this behaviour of N. gonorrhoeae mathematically. Photo: Hui-Shun Kuan / FAU