A theoretical method allows the description of molecules coupled to light - the vibrations of the molecule play the central role. 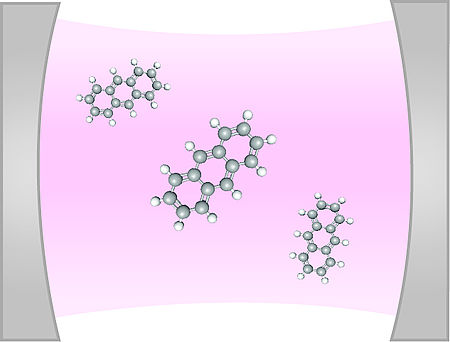 In recent years, great experimental progress has been made in confining light on a nanometer scale - for example with the aid of optical resonators or plasmonic structures - and allowing it to interact with atoms or molecules in a controlled manner. If the interaction is strong enough, light and matter unite to form so-called polariton states - hybrid states that exhibit both the properties of light and matter.  In contrast to atoms, however, molecules have a complicated internal dynamics: The nuclei can oscillate against each other and thus also influence the interaction with light. For example, the absorption of a light quantum automatically causes vibrations in the molecule.

A theory developed in the group of Claudiu Genes now allows the description of the light-molecule interaction under consideration of the internal molecular vibrations. The method allows, for example, the calculation of absorption and emission spectra of the molecule.

The authors also use the method to describe another process: If two molecules are close to each other, they can exchange energy via a so-called FRET process, a process that also occurs with high efficiency in nature during photosynthesis. Here, too, the vibrations of the molecules are decisive: they ensure that the energy transfer can only take place in one direction, while the transfer in the opposite direction is blocked. This guarantees an energy transfer with high efficiency.