When severed spinal cord grows back together again 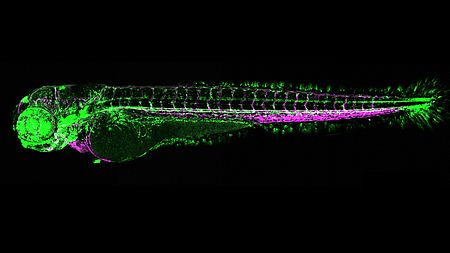 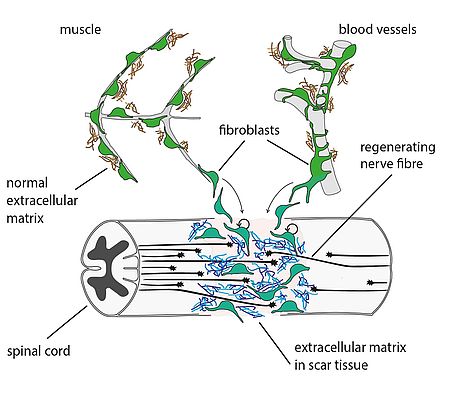 How zebrafish mend the spinal cords: If nerve tracts in the animals are damaged, certain connective tissue cells, called fibroblasts (green), migrate to the wound and form scar tissue. To do this, they secrete an extracellular matrix(blue). A team of researchers from Erlangen, Dresden and Athens has now discovered which cell types and which inhibiting and stimulating substances play a decisive role in the healing of the nerves.

After an injury to the spinal cord, patients often remain paralysed because damaged nerve tracts do not regrow due to the formation of scar tissue. Scientists from the Max Planck Institute for the Science of Light in Erlangen, together with colleagues from Dresden and Athens, have now been able to identify important cells and molecules in the scar, using zebrafishes as a model organism.

When the nerve fibres in a spinal cord are wounded, the affected person suffers from life-long paralysis and, depending on the severity, even has to be ventilated. This is quite different from zebrafish: following a spinal cord injury nerves can re-grow to bridge the gap. After some time, the fish is able to swim nearly normally.

The reason for this astounding ability: the scar tissue of zebrafish permits the growth of nerve fibres, whereas in mammals it inhibits regeneration. A research team led by biotechnologist Daniel Wehner has now identified the cells, genes and factors that play a decisive role in this process in fish. He heads the junior research group for neuroregeneration in the Department of Biological Optomechanics at the Max Planck Institute for the Science of Light in Erlangen and the Max-Planck-Zentrum für Physik und Medizin. The scientists have now published their scientific results in the journal Developmental Cell.

Fish are able to move again even after severe injuries

As soon as the spinal cord has been injured, certain connective tissue cells in mammals, the fibroblasts, invade the wound. There, these cells produce a meshwork of molecules that form the scar tissue. The main components include collagens, elongated, fibrous proteins. This network of molecules, the extracellular matrix (ECM), inhibits the growth of nerve fibres - possibly because the nerve processes cannot penetrate the dense network, according to a common hypothesis. Therefore, some scientists are trying to suppress the formation of scar tissue in order to develop therapeutics for spinal cord injuries.

But that alone may not be enough: Zebrafish also form scar-like tissue after spinal cord injury. Nevertheless, the animals can swim again after some time. Fibroblasts also colonise the wound and secrete an extracellular matrix. When this process is suppressed, the nerve tracts fail to reconnect, as Wehner and his colleagues were already able to demonstrate in 2017.

However, as the researchers were able to show in the course of further sophisticated genetic studies, the wound tissue of fish and mammals differs significantly. The composition of the ECM produced by zebrafish actually promotes the growth of nerves. In contrast, their connective tissue cells, whose origin the researchers have now been able to pinpoint, release significantly fewer inhibitory ECM molecules than is the case in mammals, where these substances slow down or suppress the regeneration of the nerve pathways.

If the researchers succeed in the future in specifically suppressing the formation of inhibitors in the mammal and simultaneously stimulating the production of growth-promoting molecules, this could open up new therapeutic opportunities for paralysed people. Future work involves the systemic comparison of scar tissue in fish and rodents to provide further insights into this process. "But it will probably be years, if not decades, before our results are used in clinical practice," says Max Planck researcher Wehner.