A pulse for tap-proof quantum communication 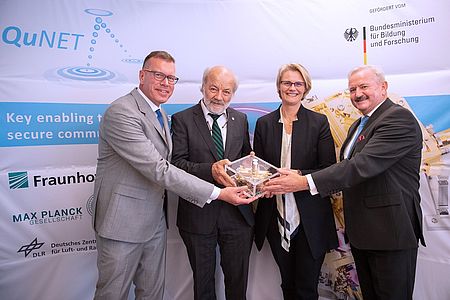 In the future, it will be possible to exchange data in a tap-proof manner - with the aid of quantum physics. To achieve this goal, the German government will massively increase its support for optical quantum communication in the coming years. At a press conference at the Fraunhofer Forum in Berlin on 17 May, Federal Research Minister Anja Karliczek announced the official launch of the new "QuNET" initiative. In a consortium with industrial partners, the Max Planck Society, the Fraunhofer Society and the German Aerospace Centre will develop a practical communication network for quantum cryptography so that federal institutions can initially exchange data securely.

In order to advance the research and development of a quantum network, the Federal Ministry of Education and Research (BMBF) intends to provide 165 million euros in three phases over a total of seven years, as Federal Research Minister Anja Karliczek announced at a press conference at the Fraunhofer Forum in Berlin. In the first phase alone, the initiative will receive around 25 million euros over two years. "In the digital age, business and society are more dependent than ever on secure communication. Secure data lines are the lifelines of our age. Data exchange must therefore be made as secure as possible. Quantum communication offers unique opportunities for this," said the Minister. "With the 'QuNET' initiative, top German researchers and companies are jointly laying the foundation stone for secure communication in the future. I am grateful to the participants in this unique project for their commitment to this field of the future".

A Model for a German Infrastructure of Quantum Communication

The initiative brings together the Max Planck Institute for the Science of Light in Erlangen, the Fraunhofer Society with its Institutes for Applied Optics and Precision Engineering IOF in Jena and for Telecommunications, the Heinrich Hertz Institute HHI in Berlin and the German Aerospace Centre. Industrial partners from the fields of telecommunications, system and component development, security and satellite operation are also involved in the project, including companies such as Deutsche Telekom AG, ADVA Optical Networking and Tesat-Spacecom.

QuNET's initial goal is to enable federal government facilities to communicate securely. This quantum network is then to serve as a model for a German infrastructure of quantum communication and will also be groundbreaking for the development of a quantum Internet. On the European level, the Federal Government and the QuNET consortium partners want to create a secure European data room. "Germany and Europe must develop their own competencies in this area in order not to become dependent on others. This is why we need to advance research in this future field. Germany and Europe should become the most trustworthy data room in the world - that is why I will put this topic on the German and European agenda," said Anja Karliczek.

In concrete terms, the partners of the initiative will create the physical and technical prerequisites for creating a heterogeneous network for quantum communication from various forms of transmission such as laser signals through optical fibres and through the air to satellites and electronic data transmission. So far, quantum states have only been exchanged via one of these media at a time. For practical applications of quantum cryptography on a large scale, however, a data packet must be able to change medium on its way from sender to receiver. In addition, the consortium partners will work on optical fibers in which fewer signals are lost than in today's lines. Such transmission paths are necessary in order to send the weak and fragile quantum information more efficiently. Finally, QuNet will also develop efficient transmission possibilities for light into quantum memories that can hold quantum information so that it can be refreshed on long transmission paths or used in quantum computers.

The fact that quantum information cannot simply be amplified like classical information makes transmission over long distances more difficult, but makes it physically impossible to intercept it unnoticed, as Gerd Leuchs, Director at the Max Planck Institute for the Science of Light, explains: "Every unwanted listener changes a quantum object. Therefore, it is impossible to make perfect copies of an unknown quantum object. Quantum physics also helps cryptography to determine numerical codes that serve as keys and are to be determined randomly. For quantum measurements are based on real chance, while a cube result could be predicted if one knew all the physical parameters of the throw. "The randomness of quantum measurements promises perfect random numbers. Perfect random numbers cannot be generated in any other way," says Gerd Leuchs. Thus, the peculiarities of quantum physics lay the foundations for QuNet and make it possible to transfer data safely in the future.