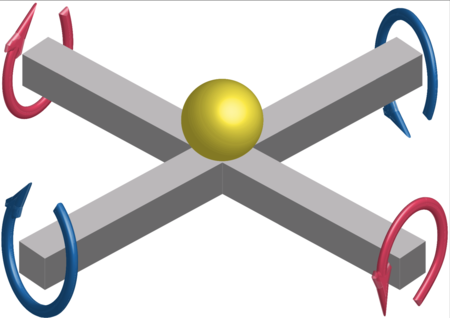 Researchers in the group of Peter Banzer at the Max Planck Institute for the Science of Light (MPL) now show in an article published in AAAS’s Science Advances how active or passive linear electric dipole emitters can be utilized as sources of circularly polarized light waves propagating to the far-field. “This research sheds new light on the hidden properties of fundamental sources of electromagnetic radiation,” says Sergey Nechayev, one of the authors of the original idea.

The results presented by the MPL team pave the way towards generation of chiral light from linear electric dipole sources, such as quantum dots, dye molecules or other emitters. Their findings will have practical implications for a variety of future nanophotonic technologies ranging from microscopy and sensing to quantum information processing.

The most fundamental source of electromagnetic radiation consists of two opposite electric charges oscillating along a straight line with a frequency ω - an oscillating electric dipole. It seems reasonable to assume that the electromagnetic radiation emitted by an oscillating linear electric dipole is also linearly polarized, meaning that the direction of the electric field of the emitted waves oscillate along a certain line. Indeed, if the emitted light is measured far from the source, the observed field is strictly linearly polarized. However, this is not the case, if the electric field is measured in the immediate vicinity, or in the “near-field”, of the source. The extremely complex nature of Maxwell’s equations dictates that in the near-field region of a linear dipole, the electric field is structured and points in different directions, drawing an ellipse, or even a circle during one period of the oscillation. However, these elliptically or circularly polarized fields remain confined to a wavelength-sized region around the dipole and do not propagate to the far-field.

To produce circularly polarized emission, the scientists placed linear electric dipoles close to a dielectric substrate of higher refractive index, which converts part of the non-propagating near-field to far-field propagating light. They confirmed their findings in a nanophotonic experiment, where a linear oscillating electric dipole is induced in a spherical gold nanoparticle by an external light beam. Moreover, they suggested and numerically verified a practical configuration in which circularly polarized waves produced by a linear electric dipole could be coupled directly to light-guiding structures.