On August 1, Kristian Franze will become one of the directors of the Max-Planck-Zentrum für Physik und Medizin (MPZPM) - at the same time he will become director of the Institute for Medical Physics and Microtissue Engineering at the Friedrich-Alexander-Universität Erlangen-Nürnberg (FAU). The MPZPM was founded in a joint initiative of the Max Planck Institute for the Science of Light (MPL), FAU and the University Hospital Erlangen. 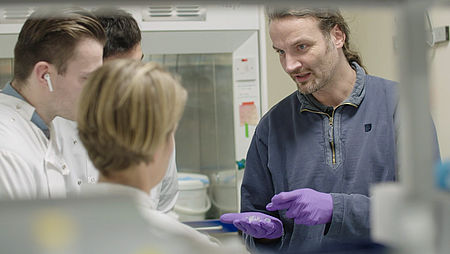 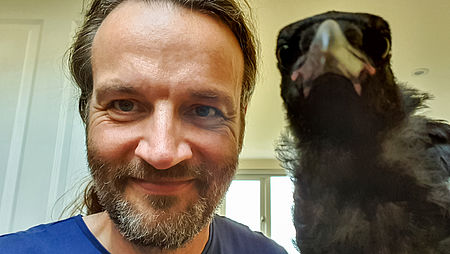 "We are very pleased to have attracted such an internationally renowned researcher like Kristian Franze to Erlangen," explains Professor Florian Marquardt, Managing Director of MPL. Franze's work about the interaction of mechanics and the nervous system is regarded as groundbreaking. He has received several awards for his research, including a Humboldt Professorship last year, the most highly endowed German scientific award. Until recently, he was Reader for Neural Mechanics at the University of Cambridge in Great Britain. Franze studied veterinary medicine at the University of Leipzig, where he also received his doctorate in physics. With a Feodor Lynen Research Fellowship from the Humboldt Foundation, he then went to Cambridge as a postdoctoral fellow.

In an interview, Kristian Franze explains what he is planning to do in Erlangen, where the focus of his work will be in the future - and why he is looking forward to a culture shock.

Professor Franze, on August 1, you will take up two jobs in Erlangen - at the MPZPM and at FAU. Why did you decide to come to Franconia?

I am attracted by the many opportunities here to work interdisciplinarily: The conditions in Erlangen are simply great for working together with physicists, biologists, medical doctors and engineers. A breath of fresh air is blowing here. I also already know a number of colleagues and there are many opportunities for cooperation.

What are your plans for the first months in Erlangen?

Of course, I first have to set up a functioning laboratory in the building that I will be moving into temporarily. The goal is to be able to continue research as quickly as possible. Until the new MPZPM building is inaugurated in three or four years.

If you are looking further into the future, what would you like to have achieved in five years?

A research group in which students and postdocs are passionate about their research and work together as a multidisciplinary team to answer exciting questions. And I would like to have contributed to a scientific landscape in which physicists talk to and work with biologists and doctors as a matter of course.

And what insights do you want to have gained by then?

One question is of great interest to me: how do mechanics, such as cellular forces and tissue stiffness, contribute to nerve cells knowing where they have to grow and to which other cells they should connect? I would like to better understand how the brain develops, how neuronal networks are formed, and how stem cells decide whether they remain stem cells or develop into nerve cells.

These are all phenomena in which mechanics play a key role. But we still know very little about how exactly it works. This is basic research, which is a very important area in my laboratory - driven by curiosity. At the same time, we are also investigating clinically relevant questions, in which mechanical signals are crucially involved.

Can you give us an example?

At the moment, we are investigating how spinal cord injuries can be treated. We are trying to find out why mammals cannot renew damaged nerve tracts, whereas fish can do it quite naturally. Frogs are an extreme example: as tadpoles, they can easily regenerate nerve cells, whereas adult animals cannot. We want to find out why this is the case and test whether the underlying mechanisms can be transferred to mammals and eventually even to humans.

In addition, we are collaborating with Stefanie Kürten, Director of the Institute of Anatomy and Cell Biology at the FAU, in the field of multiple sclerosis. In this disease, the cells that surround and electrically isolate nerve cells perish. And there are many other projects in Erlangen I am already involved in. For example, we are working on a proposal for a collaborative research center to be funded by the German Research Foundation. I am furthermore involved in three applications for postgraduate training programs. These will always focus on interdisciplinary work, combining physics, medicine, biology and mathematics. For the next generation of students, it should be a matter of course to work across disciplines.

When will patients benefit from your work?

When or if at all? This is difficult to predict. At least not within the next five years. We have carried out first promising experiments in which some neurons have regenerated. But even if we can reproduce these data on a larger scale, it will probably take decades until these approaches can be transferred to humans.

We as a research group will not succeed in curing multiple sclerosis or paraplegia on our own. But we can hopefully contribute to this by uncovering aspects that others have not yet thought about. Mechanical processes in cells are often as important (bio)chemical processes. We have consider chemistry and physics together if we want to achieve something big. This is another reason why we work closely with medical scientists.

In your laboratory in Cambridge, you have the skeleton of a bulldog as a veterinary object of study. Is it moving with you to Erlangen?

For the time being, Bruno, as we call him, stays over there. I plan to keep my laboratory in England for a while so that my students can finish their Ph.D.s in Cambridge. And as long as they are still there, Bruno will stay with them. It doesn’t work without him.  He is the last one to move.

From British Cambridge to Bavarian Erlangen: Are you afraid of a culture shock?

We expect a culture shock - a positive one. We are very much looking forward to the move. My wife, my two children, we all speak German at home. We are not big city people, and we like Franconia very much. In these times, we are very much looking forward to being part of the EU again, as well as of the German health system and school system. And to having a bakery with good bread next door.