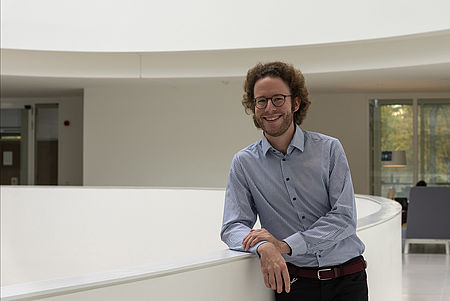 From Stanford to Erlangen: A team led by chemist Leonhard Möckl is studying sugar compounds on the surface of cells at the Max Planck Institute for the Science of Light – and wants to use light-activated substances to fight cancer.

At the interface between optics, biochemistry, and medicine, Leonhard Möckl's new independent research group examines biological systems. Möckl focuses on two key questions: How does the glycocalyx – the sweet shell of cells – influence the cell condition? And how can therapeutic compounds be activated with light such that they kill cancer cells in precisely defined locations in the body, without damaging healthy tissue?

The glycocalyx is a highly complex structure surrounding every cell in the body. It consists of sugars, and the proteins and fat molecules to which these sugars are attached. The glycocalyx resembles a cloak - in fact, the term literally means "sweet husk". Therefore, the glycocalyx is the first part of the cell that interacts with the environment, for example with other cells, proteins, or pathogens.

The glycocalyx exhibits a thickness of many tens to a few hundred nanometers, depending on the cell type. Therefore, all membrane proteins are literally buried under a layer of sugars. For many decades, researchers paid little attention to this structure. However, recent findings show that it influences a number of vital processes. For example, the glycocalyx regulates the immune response, influences the formation and metastasis of tumor cells, and is a binding partner for pathogens, for both bacteria and viruses such as SARS-CoV-2.

However, scientists are only just beginning to understand how exactly the glycocalyx influences cellular processes. The elusiveness of the glycocalyx is rooted in its astonishing complexity: tens of thousands of different compounds, from small sugar trees on proteins to long sugar chains, are tightly packed in a very small space.

Möckl, who was previously a postdoctoral researcher in the group of Nobel Laureate W.E. Moerner at Stanford University, wants to close this knowledge gap and find out how the glycocalyx and the cell interact on a mechanistic level. He uses the most recent non-invasive optical methods, for example iSCAT (interferometric scattering) microscopy and other super-resolution methods. This allows him to look at nanometer-sized structures in “slow motion” and to track how they move and organize spatially. He does not only use established, highly specific labeling methods, but also develops new approaches. His group pays particular attention to the glycocalyx of cancer cells in order to find out how the oncogenic glycocalyx influences growth and metastasis of tumors.

These findings will help to design novel cancer therapeutics. To achieve this, Möckl relies primarily on bisacylphosphane oxides (BAPOs). They are commonly used as cheap photoinitiators in industrial applications: If they are exposed to visible light, they produce free radicals. These very reactive compounds then ensure that small, short molecules combine to form long chains, e.g. to produce plastics. Free radicals, however, are also fascinating from a therapeutic point of view: They put cells under stress and cause them to die.

In a pilot study, Möckl was able to show that various BAPO compounds are non-toxic before light activation. Cells internalize them without being damaged: a major difference to the cancer drugs currently in use, which have quite serious side effects.

Only after activation with visible light BAPOs attack the tissue: The inactive BAPOs are split and free radicals are created which quickly cause cell death. Based on these encouraging results, Möckl optimizes the BAPOs and develops them into candidates for clinical application: for example, by maximizing how many radicals are generated after activation; by investigating novel light guides for tailored applications in deep tissue; and by targeting BAPOs to specific tumor types, further minimizing side effects.