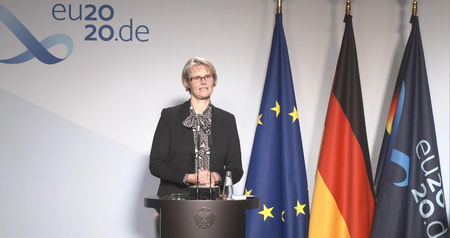 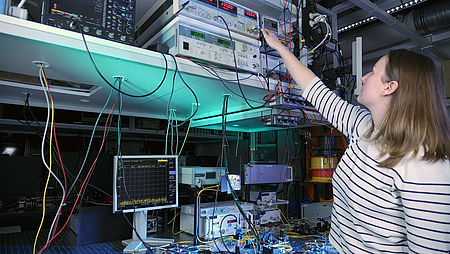 An initiative of the German Federal Ministry of Education and Research (BMBF) has been researching new possibilities for tap-proof communication for a year now. The “QuNET“ initiative is working on procedures for exchanging information between authorities or in critical infrastructures - without third parties being able to eavesdrop. On December 2, 2020, German Federal Research Minister Anja Karliczek and the participating research institutes presented first results. At a BMBF press conference, they introduced the basics of system architecture and systems for exchanging quantum keys over various distances.

Data security as the basis of digital democracy

“For the German Federal Government, protecting the privacy of citizens in the digital world is a top priority. The security of data exchange is also of fundamental importance for the economy. In the long term, this security can only be achieved with the help of quantum communication,” said German Federal Research Minister Anja Karliczek at the press conference.

Among other things, new types of quantum computers pose a threat to tap-proof and tamper-proof data transmission. They will be able to bypass previously common encryption methods. The technologies of the future are already casting their shadows today: According to the motto “Store now, decrypt later”, data can already be stored today and read out later with the help of more powerful computers or new algorithms. An information video (German only) shows the challenges.

Against this background, the BMBF initiative QuNET has been researching the potentials of high-security quantum communication for society and economy since autumn 2019. The aim is to preserve Germany's national technological sovereignty and the security and confidentiality of data, also in the face of new communication technologies.

“My goal is to make Germany a world leader in the field of ‘quantum internet’. Germany can become the driving force of innovation of the European Union in this field and can take us a considerable step forward on our path to technological sovereignty. QuNET makes an important contribution in this respect. Already in the first year, technologies for a quantum-secure connection between two federal institutions were developed in the project,” said German Federal Minister Anja Karliczek.

Last year, the research societies involved in the project - the Max Planck Society, the Fraunhofer Society and the German Aerospace Center - jointly developed important basic principles for modern and secure communication standards. The scientists looked at the overall architecture for systems for quantum-secure communication as well as at the possibilities for exchanging quantum keys over long, medium and short distances using free-beam and fiber systems.

The Max Planck Institute for the Science of Light (MPL) in Erlangen develops systems and overall system architectures to increase the security of communication by using quantum keys. “Researching the overall system architectures requires a very interdisciplinary approach, which is why we combine novel methods with established procedures from classical cryptography,” explains Gerd Leuchs, founding director of the MPL and now head of the Emeritus Group Optics and Information. “In doing so, our systems allow the exchange of quantum keys even by using large parts of the already existing telecom technology.”

Meanwhile, a team at the German Aerospace Center (DLR) is researching systems that can transport quantum states over long distances. With the help of optical free-beam systems, aircraft or satellites are used to bridge large distances, for example within Germany or between different countries. “In QuNET, we are developing the necessary building blocks, core technologies and concepts for the overall system technology here at DLR,” explains Christoph Günther, director of the DLR.

The Fraunhofer-Gesellschaft develops technologies that enable quantum-based communication over short and medium distances, i.e. within a city or metropolitan region. For this purpose, free-beam and fiber systems are used. “Fiber-based systems enable the integration of the latest quantum technology into currently existing communication networks, such as fiber optic cables,” explains Martin Schell, director of the Fraunhofer Heinrich Hertz Institute HHI in Berlin. Free-beam systems, on the contrary, such as those being researched primarily at the Fraunhofer Institute for Applied Optics and Precision Engineering IOF in Jena, can realize short-term and mobile connections. For this purpose, telescopes and light sources are being developed in Jena.

In addition, Fraunhofer is focusing on the development of interfaces between all these different subcomponents and their implementation in existing communication network infrastructures. “This is how we contribute to the promotion of a heterogeneous, hybrid communication network," sums up Andreas Tünnermann, director of Fraunhofer IOF and spokesman of the QuNET steering committee.

In addition to the three lead research organisations, an advisory board consisting of experts from industrial companies in the fields of telecommunications, system and component development, security and the space industry as well as the Federal Office for Information Security is also involved in the QuNET initiative. The participation of further partners, especially from industry, is planned.

For more information on the participating institutes and the most important questions and answers, please see our information sheet with facts and figures on the QuNET initiative.