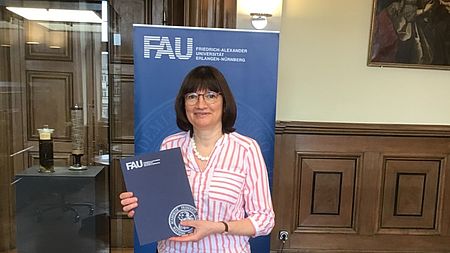 Maria Chekhova, head of the independent research group Quantum Radiation, was appointed professor (20%) at the Friedrich-Alexander-Universität Erlangen-Nürnberg (FAU). She will be part of the Chair of Experimental Physics (Optics).

Maria Chekhova studied physics at the Lomonosov Moscow State University. After her PhD she also worked there as a researcher until 2010. She gained her habilitation degree in 2004 with the thesis "Polarization and Spectral Properties of Biphotons". Her group at the Max Planck Institute for the Science of Light started in 2009 as part of the Leuchs Division and is an independent research group since 2015. With her group, Maria Chekhova works in the field of experimental quantum optics and is developing sources of nonclassical (quantum) light.