Artificial knee tissue to help in the fight against arthritis 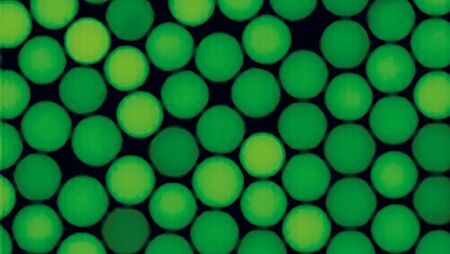 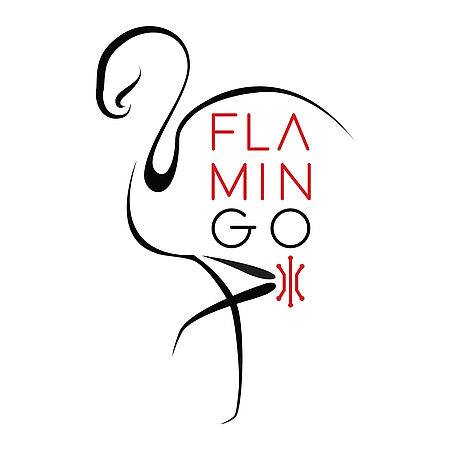 Logo of the Flamin-Go project

In a project funded by the European Union with almost six million euros, researchers from Europe and Turkey are reproducing tissue from the knee - on a biochip. The goal: to better understand what happens in the joint during inflammations such as rheumatoid arthritis, to test active substances that protect from further damage and to develop ultimately bespoke therapies for each patient. Scientists from the Max Planck Institute for the Science of Light in Erlangen are part of the project.

An inflamed knee can be very painful - and in the worst case, doctors have to replace the joint with a prosthesis. Cause of the ailment is often rheumatoid arthritis, in which the body's defense system attacks its own tissue. This form of autoimmune disease not only affects the knees, but can occur in any joint. According to the German Society for Rheumatology, around 500,000 people in Germany suffer from inflammatory rheumatoid arthritis, and as many as 2.9 million people in Europe.

Although there are drugs against arthritis, they only combat the symptoms and do not work equally well for all patients. That is why a consortium of 13 research institutions and companies from the European Union, Great Britain, Switzerland and Turkey have joined forces in the Flamin-Go project (From pathobioLogy to synoviA on chip: driving rheuMatoId arthritis to the precisioN medicine GOal). The partners, led by the Università del Piemonte Orientale in Vercelli in northern Italy, want to establish an innovative, fast and cost-effective alternative to pricey clinical trials with human test subjects. The Max Planck Institute for the Science of Light (MPL) in Erlangen plays a key role in the project. The official kick-off meeting will take place on 4 and 5 February.

The researchers will build a biochip in which the tissue of a joint will grow - complete with cartilage, bone, blood vessels and cells. The raw material comes from the joints of patients. This makes it possible to tailor an individual therapy for each person.

Salvatore Girardo, head of the Technology Development and Service Unit Lab-on-a-chip Systems at MPL, and his colleagues are developing special, flexible plastic beads with precisely defined properties for the project. The spheres will be used as mechano-sensors, which are able to provide information about mechanical forces in a tissue and to interact with surrounding cells. The cells can deform a bead and the amount of deformation is used to analyze the forces exerted by the surrounding cells. The eight to 25 micrometre small spheres (one micrometre corresponds to one thousandth of a millimetre) behave similarly to human cells; under pressure they deform in the same way as white blood cells do.

Mechanical forces play a major role in a joint because they can contribute to further damage in already injured tissue. All the beads will be marked with dyes, because they need to be fluorescent to be detected and to measure their deformation. The researchers will mark them with special receptors in order to activate their interaction with specific cells or tissues. In the same way the beads can act as artificial cell-like objects and be used to try to understand what is the impact of physical parameters of cells (size and ability to deform) on the migration of immune cells in an inflamed tissue. The Erlangen researchers will receive more than 250,000 euros for this part of the Flamin-Go project. The European Union is investing a total of 5.8 million euros in the project as part of the Horizon 2020 programme.

The researchers are pursuing two goals in this project: On the one hand, they want to better understand why patients react so differently to arthritis medication, and on the other hand, they are looking for biomarkers that give an indication of which active ingredient could help a patient. Until now, doctors had to rely on trial and error to find the best drug for a patient. In fact, 10 to 20 percent of arthritis patients today do not respond to any of the available therapies.

With their chip, the scientists hope to be able to test possible new active substances more quickly than before and thus replace at least part of the expensive, time-consuming and lengthy studies with volunteers. The ultimate goal: a personalized treatment for each patient. 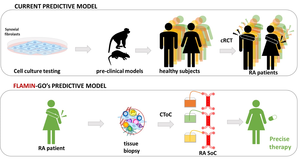 The Flamin-Go researchers will use tissue samples of patient with rheumatoid arthritis and grow the cells in biochips to test which drugs work best. Graphic: Flamin-Go