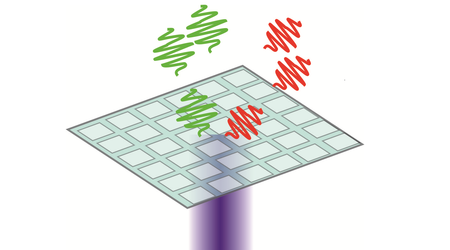 Innovative quantum technologies for communication, imaging, and metrology depend on photon pairs, two light particles which are connected even over long distances. Researchers from the Max Planck Institute for the Science of Light in Erlangen together with colleagues from Singapore have now developed a new method to produce such entangled photons – with extremely thin layers or metasurfaces.

Optics become more and more miniaturized. Sources, converters, and detectors of light reduce in size, and one of the pronounced tendencies is towards flat optics. One ultrathin layer can work as a light source, another layer as a lens, another one as a prism and so on. However, generating photon pairs, or biphotons, has not yet been achieved on this quasi-2D platform. These pairs are a workhorse in many quantum information tasks: in quantum cryptography (in particular key distribution), in quantum imaging, and in quantum metrology.

Maria V. Chekhova, head of the independent "Quantum Radiation" Research Group at the Max Planck Institute for the Science of Light in Erlangen, and her colleagues have now reached an important milestone: They are able to produce photon pairs from a 2D source - a film of subwavelength thickness. Scientists from Erlangen and Singapore use layers of lithium niobate and gallium phosphide, which are only 300 – 400 nanometers thick (a nanometer is a millionth of a millimeter), less than the wavelength of visible light.

“Our work opens the door to a new field, flat nonlinear quantum optics”, says Professor Chekhova, “we envisage that our technique implemented in metasurfaces could lead to major breakthroughs in nanophotonics”. She and her group are now structuring the semiconductor films and try to enhance the efficiency of pair production further.