With new technology, researchers can look deep into the interior of cells – in 3-D 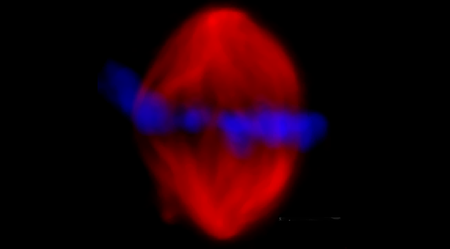 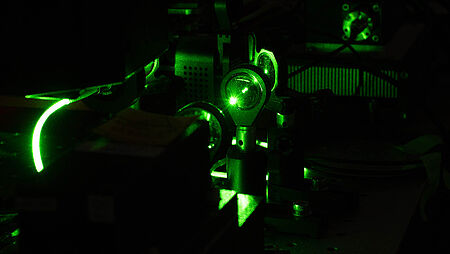 Tracking the mystery of cell division: Scientists of the IRI Life Sciences of Humboldt University and the Max Planck Institute for the Science of Light in Erlangen, have combined two microscopic methods in such a way that they can examine in detail the molecular machine called the mitotic spindle: it distributes the chromosomes with high precision when cells divide.

Due to the current pandemic, we all pay attention to maintaining distance - on the way to work, while shopping or walking in the park. The inner life of our cells remains unimpressed by such regulations. There, a dense crowd of molecules prevails. This crowding is very important for the cell, since interactions between molecules are necessary for biochemical reactions to take place.

Of particular interest are structures within the cell that perform critical tasks. For example, the mitotic spindle– a self-organizing molecular machine that performs the function of segregating chromosomes during cell division. But how densely packed is a cell? How does the spindle manage to line up the chromosomes in this crowded environment? And how does one measure it?

Hidden in plain sight: the densely packed inner part of the cell

Every time a cell divides, the chromosomes must be distributed evenly between the two daughter cells that are formed. This task is completed by the mitotic spindle, which is built from hundreds of molecules that continuously interact to maintain a dynamic steady-state. Despite being made of components that turn over rapidly (within seconds), spindles are able to maintain their overall shape and size for extended time periods (hours).

While the last few decades have helped to identify the molecules essential for spindle function, a major gap remains in the understanding of how the different molecular processes collectively give rise to the spindle’s mesoscale material properties. "There are two main reasons for this.", explains Simone Reber, research group leader at the IRI Life Sciences. "In complex mixtures, like a densely packed cell, molecular properties of individual components overlap or form entirely new ones. Also, some properties remain unknown simply because it has been impossible to measure them.", she adds.

To understand how the spindle forms and how it exerts forces on chromosomes during cell division, it is vital to understand the relationship between the spindle’s individual building blocks and its complex material properties.

Combination of fluorescence microscopy and tomography leads to new insights

Traditional imaging methods such as fluorescence microscopy provide us with images that are not only visually stunning but are ideal for identifying the subcellular localization of fluorescently labelled proteins. With the help of such techniques, the metaphase spindle has so far been proposed to be a physically denser phase of the cytoplasm, where proteins required to maintain the structure localize in high concentrations. Looking at an image of a spindle labelled with fluorescent tubulin (the spindle’s primary building block) confirms this notion. But is that actually true?

To answer this question, Abin Biswas (also a member of the Reber Lab at IRI Life Sciences) and Kyoohyun Kim from the group of Jochen Guck, director at the Max Planck Institute for the Physics of Light in Erlangen, built a new optical system capable of performing correlative confocal fluorescence microscopy and optical diffraction tomography (ODT). ODT has the advantage of providing quantitative 3-D refractive index distributions with micron-level resolution. Combined with fluorescence imaging, the setup provides both qualitative and quantitative information via one optical system.

"ODT works much like an optical mini-balance", says Abin Biswas, first author of the study. "What was surprising, was that we couldn't see the spindle via ODT at all." This means that the spindle has the same refractive index, and therefore the same density as the surrounding cytoplasm. Thus, the molecules within the spindle are not more densely packed than the rest of the molecules in the cell. The current study also suggests that cellular phase transitions may not necessarily involve a density transition. Therefore, sub-cellular structures such as the spindle are formed by the concentration of essential molecules without affecting local density. These findings toss out previous assumptions about the spindle being a denser cytoplasmic phase and reenforce the need to better characterize biologically relevant mesoscale structures - which remains an exciting topic for future research.

Cancer, genetic diseases: why are the physical properties of the mitotic spindle so important

Why is it important to measure the physical properties of the spindle? "We know that defective spindles cannot distribute chromosomes accurately. This can have fatal consequences", Abin explains. Cells with too many or missing chromosomes are found in malignant tumors. If errors occur early in embryonic development, they can result in trisomies, such as Down syndrome. It is therefore not only of interest for basic research but also for clinical medicine to understand the exact mechanisms that determine the material properties of the mitotic spindle.