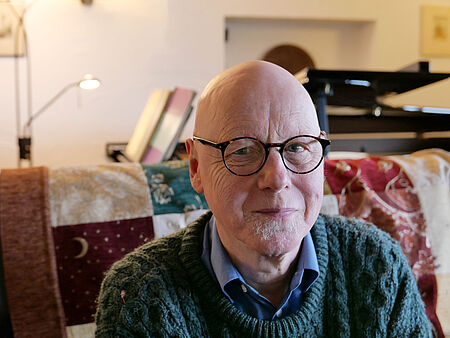 Fibres made of special glass and filled with a defined pattern of microscopic hollow channels are helping to better understand the sometimes strange properties of light. And they have led to a broad spectrum of real-world applications – from communications to medicine and environmental sensing. In a special lecture on the 17th of May in celebration of the International Day of Light, Philip Russell will describe how he invented photonic crystal fibres 30 years ago and how they changed what we can do with light.

Baltimore, USA, Monday, May 14th, 1991: Philip Russell was attending the Conference on Lasers and Electro-Optics (CLEO), when he was struck by an idea. What would happen if he could corral light within an array of tiny hollow channels in a glass fibre and trap light by the (then recently proposed) photonic bandgap effect? He scribbled his thoughts into his notebook – and the photonic crystal fibre (PCF) was born.

It took Russell’s group (then at the University of Southampton) four years to find a way to make these novel fibre structures and go on to demonstrate the first PCF that actually guided light. Since then, he and his colleagues, together with many scientists from all over the world, have been discovering how the often astounding properties of PCF allow light to be controlled in new ways. Today there are probably very few optical laboratories within which PCF is not used in some form or other, often related to real-world applications in fields such as medicine, environmental sensing, advanced laser sources and optical communications.

“Initially it was far from clear whether such an intricate microstructure could ever be made, since nothing comparable had previously been attempted”, recalls Russell, founding director of the Max Planck Institute for the Science of Light. Nevertheless, after several years of trying different approaches, the first light-guiding PCF emerged from the drawing tower in late 1995, ushering in a new age of fibre optics.

By offering enhanced control over the propagation of guided light, PCF has led to a whole series of scientific and technical breakthroughs in the science of light. Solid-core versions are being used to transform invisible infrared laser pulses into white light millions of times brighter than the sun – revolutionary new light sources with a multitude of applications. Hollow core PCFs filled with gas are used to compress infrared laser pulses to durations a million-billion times shorter than a second, underpinning a range of unique and extremely bright sources of tuneable deep and vacuum ultraviolet light. When chirally twisted, PCF acts like an impeller, creating optical vortices with fascinating properties. In hollow core PCF, small particles can be optically trapped and propelled over long distances and used as moveable point sensors.

These developments also helped other scientists to achieve remarkable breakthroughs: John Hall, a physicist at the University of Colorado and Theodor Hänsch, Director at the Max Planck Institute of Quantum Optics in Garching, made use of octave-spanning frequency combs generated in PCF to construct the world's most accurate optical clocks. Hall and Hänsch, together with the late Roy J. Glauber, were awarded the Nobel prize for their work in 2005.

In 2000 a team of Australian scientists discovered that the iridescent spines of the sea mouse, a marine worm of the genus Aphrodita, were structured in a similar way to PCF. They change colour from red to green to blue as sunlight shines on them from different angles. In 2001 a local newspaper in Bath, UK, published an article entitled High tech sea mouse beats Prof to answer, writing that "It's taken 10 years for a Bath scientist to understand what a species of sea worms has known for millions of years." Russell's comment at the time: Well, maybe!

Philip Russell will give his lecture on the 17th May at 3.00 pm CET.

We will send you then the Zoom link one hour before the lecture.

Philip Russell is Emeritus Director at the Max-Planck Institute for the Science of Light (MPL), which he co-founded together with Gerd Leuchs in January 2009. From 2005 to 2021 he was Krupp Professor of Experimental Physics at the University of Erlangen-Nuremberg. He obtained his doctorate at the University of Oxford in 1979, spending three years as a Research Fellow at Oriel College, and subsequently worked at universities and research establishments in Germany, the USA, the UK and France. His research interests have focused mainly on the physics and applications of periodically microstructured materials, especially photonic crystal fibres. He is a Fellow of the Royal Society and The Optical Society (OSA) and is the recipient of several awards including the 2000 OSA Joseph Fraunhofer Award/Robert M. Burley Prize, the 2005 Thomas Young Prize of the Institute of Physics, the 2005 Körber Prize for European Science, the 2013 EPS Prize for Research into the Science of Light, the 2014 Berthold Leibinger Zukunftspreis, the 2015 IEEE Photonics Award and the 2018 Rank Prize for Optoelectronics. In 2016 he received an honorary doctorate from the Universidad Internacional Menéndez Pelayo in Santander, Spain, and he was OSA's President in 2015, the International Year of Light.