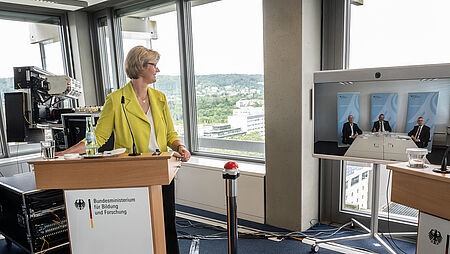 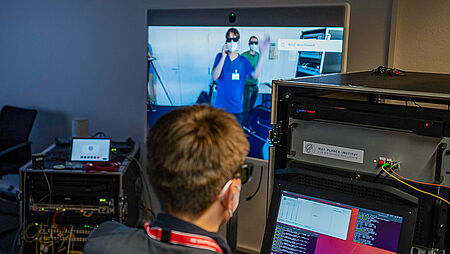 Today, two German federal authorities communicated via video for the first time in a quantum-secure manner. The QuNET project, an initiative funded by the German Federal Ministry of Education and Research (BMBF) to develop highly secure communication systems, is thus demonstrating how data sovereignty can be guaranteed in the future. This technology will not only be important for governments and public authorities but also to protect everyday data.

It was a foretaste of the communication of the future - or rather, the "data security" of the future. Because when Federal Research Minister Anja Karliczek invited members of the Federal Office for Information Security (BSI) to a video conference today, everything looked the same, at least for outsiders. Together with Andreas Könen, Head of Department CI "Cyber and IT Security" at the Federal Ministry of the Interior, Building and Community (BMI) and BSI Vice President Dr. Gerhard Schabhüser, the minister talked via video stream.

And yet this videoconference opens a new chapter in the highly secure communication of the future. Because what the eye can't see: The conversation was not encrypted using conventional methods but by means of light quanta. The trick is that if an attacker tries to access the to be generated keys, which are later used for data transmission, the light particles are manipulated. This manipulation is detected together by the sender and receiver, thus preventing an interception attempt. The detection is based on physical principles. If an eavesdropping attempt is discovered, the key is discarded and a new one is generated. By means of this strategy, only private keys are kept and therefore longterm security of the agreed keys is achieved. This sets a new milestone for data confidentiality in the digital world.

A new chapter for the highly secure communication of the future

This so-called "quantum communication" will become necessary in the light of future technological developments: In the future, quantum computers and new algorithms are expected to be able to crack previously used methods of data encryption. According to the motto "store now, decrypt later", data can already be stored today and read later, e.g., with the aid of more powerful computers.

This threatens especially data that requires long-term protection, i.e., data that will still be of great value to hackers in the distant future. This includes not only information from governments and authorities, but also corporate secrets or personal health data of citizens.

Federal Minister of Education and Research Anja Karliczek explained: "Quantum communication is one of the key technologies that play a crucial role in IT security and can help us prepare for future threats. This is so important because cyber security and cyber sovereignty are preconditions for the stability of democracy and also why I launched the QuNET initiative two years ago. QuNET is an important driver of the translation of findings from basic research on quantum communication into systems that are suited for everyday use. Our objective is to take advantage of the work of QuNET and the other projects on quantum communication funded by the Federal Research Ministry to lay the foundations for an ecosystem of producers and providers of quantum communication solutions in Germany. In this way, we can ensure the swift translation of innovative technologies and components into broad application."

In order to be able to protect the privacy of citizens as well as states and companies in the future, there is already a great need for action today. It is not just a matter of developing new and highly secure communication systems based on quantum knowhow but also of finding ways to integrate this new technology into existing IT infrastructures (e.g., fiber optic cables) and to take established cryptographic processes into account. There is also a particular challenge when it comes to long distances. Here, satellites can play a central role.

The QuNET initiative pursues the goal of enabling long-term data security. On the way to achieving this goal, today researchers from all participating institutes realized the first quantum-based video conference between BMBF and BSI in Bonn, Germany. The focus of the QuNET work is the so-called "quantum key exchange", also known as QKD (short for "Quantum Key Distribution"). QKD enables the exchange of symmetric keys whose security can be quantified. The BSI is supporting the QuNET initiative and is preparing accompanying and independent test criteria in international cooperation.

At the end of last year, the research organizations involved in the initiative - the Fraunhofer-Gesellschaft, the Max Planck Society and the German Aerospace Center (DLR) - presented important basic principles for modern and secure communication standards. Accordingly, the scientists have further developed the overall architecture for systems for quantum-safe communication, as well as possibilities for exchanging quantum keys over long, medium and short distances using free-space and fiber systems.

In the setup of the first quantum-based videoconference between BMBF and BSI, multiple free-space and fiber quantum channels have been used. This corresponds to a more complex scenario than a connection via a single quantum channel. Besides the video conference aspect of the demonstration, the set-up was also used to produce scientific data which might give important insights for communication in complex quantum secure networks of the future.