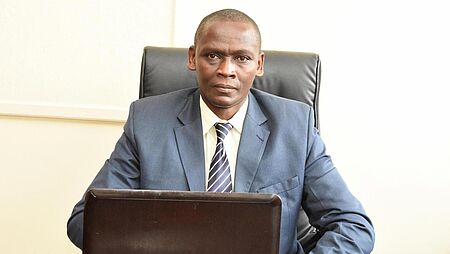 The Max Planck Society is funding the team of Professor Geoffrey Kihara Rurimo, Director of the National Institute of Optics and Lasers at the Multimedia University of Kenya in Nairobi, for the next five years - the first partner group within the Chemistry, Physics and Technology Section on the African continent. Rurimo did his doctorate under MPL founding director Gerd Leuchs and plans to cooperate with his ex-colleagues from Erlangen in the field of focusing light on nanostructures such as graphene.

Geoffrey Rurimo already studied the focussing of light and how it can be measured with the help of special semiconductor sensors during his doctorate in Erlangen from 2003 to 2006. "He achieved good results," recalls his doctoral supervisor Gerd Leuchs, "and demonstrated the necessary skills and perseverance to succeed." At the time, Leuchs was a professor at the Friedrich-Alexander University Erlangen-Nürnberg and headed the Max Planck Research Group for Optics, Information and Photonics, which later became the Max Planck Institute for the Science of Light.

It was he who proposed Rurimo for a partner group of the Max Planck Society (MPG) at the beginning of the year. With the programme, Munich wants to promote young scientists in emerging countries. There are currently more than 70 groups worldwide, many of them in China and India, but also in Latin America and Eastern Europe. In Africa, there are eight as of this year, including that of Geoffrey Rurimo, the only one in the Chemistry, Physics and Technology Section of the Max Planck Society.

MPG approved his application in mid-July, providing a maximum of around 100,000 euros spread over five years. "From September, we will use the approved funds to support students in the Master's programmes in Applied Optics and Laser Technology," explains Rurimo. From the beginning of 2022, there will also be a doctoral programme. He plans to use the funds to finance short research stays for his students at MPL and to purchase a small amount of laboratory equipment.

In recent years, Rurimo has built up the National Institute of Optics and Lasers (NIOS) at the Multimedia University of Kenya. With its three laboratories - two for teaching, one for research - it is one of the few institutions with this research focus in East and Central Africa.