From lab to fab: the Dutch corporation ASML and the Max Planck Institute for the Science of Light (MPL) in Erlangen will over the next three years explore novel special optical fibres together. ASML is a world-leading manufacturer of lithography machines for mass producing microchips. 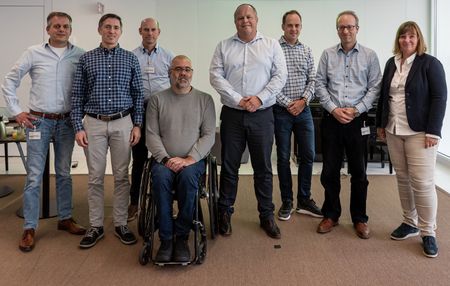 Visit of a ASML delegation at the institute* Photo: MPL

If you’re reading this text in digital form, you’re very likely to be using an electronic device produced with the help of ASML. The world-market leader in lithography systems from Veldhoven, The Netherlands, delivers its products to famous brands such as Intel and Samsung. ASML’s machines make it possible to produce the tiny semiconductor circuits without which our modern digital world would not work.

Because every nanometre counts in chip manufacturing, lithography systems are equipped with large numbers of sensors operating at different optical wavelengths so as to measure a variety of different features on silicon wafer chips. Light generation in and transport through special optical fibres can help tune these wavelengths to improve the sensors, in turn boosting the overall yield of the chip manufacturing process. These special optical fibres are known as photonic crystal fibres, first proposed 30 years ago by Philip Russell, one of the founding directors of MPL in Erlangen.

ASML and MPL are now teaming up in a research collaboration that will focus on further improving the already world-leading manufacturing process at MPL so as to optimize the fibres for the extreme demands of the semiconductor industry.

Michael Frosz, head of the Technology Development and Service Unit Fibre Fabrication and Glass Studio at MPL, had the first exploratory discussions with ASML after the company saw the manufacturing and measurement technologies under development. Over the decades, the performance of photonic crystal fibres has continued to improve as new designs and manufacturing processes emerge. For example, MPL researchers have developed highly accurate non-destructive methods for measuring the microscopic inner structure of the fibres, and have come up with designs that improve the beam quality of the transmitted light.

“Since their first demonstration in 1996, many exotic optical phenomena have been explored using photonic crystal fibres, often starting out as curiosity-driven basic research and ending up in cutting edge commercial applications”, says Russell. The partners believe that, by combining ASML’s experience in industrial processes with the scientific expertise and know-how at MPL, the resulting advances in fibre technology will prove of great value to the semiconductor industry.