Art project: Erlangen MPL for the Science of Light cooperates with Nuremberg Academy of Fine Arts

In the past, natural sciences have always inspired artists to create extraordinary art. But today, direct exchange with each other is becoming increasingly difficult. In Franconia, a bridge has now been successfully built between cutting-edge research and the artistic avant-garde. A joint project between the Max Planck Institute for the Science of Light (MPL) in Erlangen and the Academy of Fine Arts (AdBK) in Nuremberg has produced some very unusual works: Graphics, collages and even a poem. 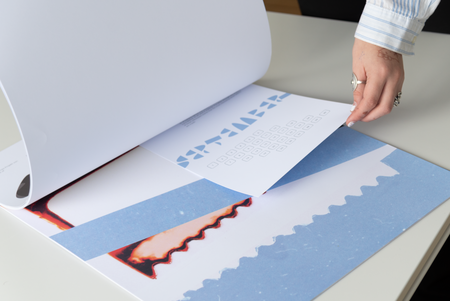 An image taken by an ultra-high resolution microscope suddenly turns into a map. A red blood cell mutates into an anti-stress ball. And an artificial intelligence draws a whole picture itself. These are examples of the projects that have emerged from the collaboration between MPL and AdBK. Erlangen scientists have presented their research projects in fields such as nano-optics or biophotonics to art students and lecturers at the academy. Inspired by this they created a series of works that have now been bundled in a large-format calendar.

"Research, like art, is full of creativity, effort, surprise and joy in creation - so both disciplines can learn a lot from each other," says Vahid Sandoghdar, one of the directors of the Max Planck Institute, explaining the commitment to the unusual project. "Art doesn't exist in a vacuum," adds Friederike Girst, Professor of Graphic Design / Communication Design at the AdBK. Together with lecturers Steve Viezens and Peter Wendl, she supervised the cooperation on the Academy's side. "In the creative collaboration between artists and academics, I was particularly pleased by the mutual curiosity of the participants," Girst continues. Research and art enriched each other for thousands of years, and the possibilities offered by the Max Planck Institute for the Science of Light in particular had provided a wonderful platform for a creative debate that has not only been opened up in strictly scientific experiments.

Attempts to make the invisible visible

The project was launched in September 2020. While mutual visits were still possible at the beginning, the Covid-19 pandemic soon left only virtual meetings. Instead of exchanging ideas during laboratory tours and studio visits, the participants had to make do with zoom meetings. It was precisely this form of communication that some students of the AdBK took up, for example by combining the graphics and laboratory set-ups shown in the lectures to create a new work. The topics the artists had to deal with were not easy ones. On five dates with three lectures each, the topics included real-time deformation cytometry, iScat microscopy and machine learning. Hannah Kleyling, one of the students, for example, later described her work as "trying to understand when we don't actually understand anything."

After this overwhelming amount of natural sciences input, the students set to work during the summer semester of 2021. The trio Paul Graßler, Jorina Fricke, Raphael Tonn from the Graphic Design study group took over the student project management until finally, after more than a year, the total of 14 calendar motives found their way to the print shop in mid-November 2021. The calendar is also exemplary in terms of sustainability: the printing inks were made from vegetable raw materials without the addition of mineral oils, and the paper was delivered by the Bavarian paper mill Gmund am Tegernsee, which has committed itself to particularly high ecological standards.

The pages of the calendar in DIN A2 format are designed very independently from each other. They present highly different approaches to and interpretations of basic research: the almost hypnotic motif in January has been drawn by a neural network - a simple form of artificial intelligence - which MPL director Florian Marquardt specially developed together with art student Raphael Tonn. Hannah Kleyling has arranged formulations and statements from the scientists' lectures typographically into a kind of poem, confronting the researchers with their own (specialized) language. Finally, Nick Pschierer has used a collage technique to rearrange the PowerPoint presentation about a tiny endoscopic camera that allows images to be taken from inside the body - and thus leads us to imagine which other invisible worlds can be conquered.