The Free State invests 300 Million Euro in the newly formed initiative Munich Quantum Valley. One of its goals: The development of a new generation of computers which use quantum technology. 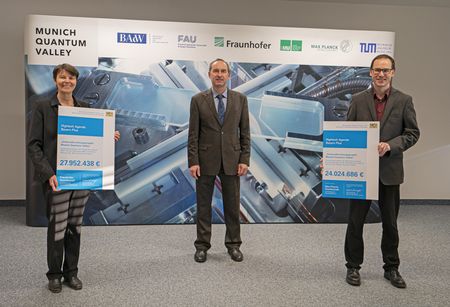 Bavaria's Minister of Economic Affairs Hubert Aiwanger has handed over funding certificates totalling 52 million euros for the development of a Bavarian quantum computer. The Max Planck and Fraunhofer Institutes involved in the Munich Quantum Valley (MQV) received the funding in an official handover yesterday at the Max Planck Institut of Quantum Optics in Garching.The two organisations are jointly developing hardware and software for the construction and operation of quantum computers in Garching, Erlangen and at other locations. Aiwanger: "Quantum technology is a central key technology of the future. That's why the Free State of Bavaria, as Europe's leading science and business location, must be ahead of the game. Munich is a top location for quantum science and technology. I am therefore pleased that we have bundled important competences in quantum research in Munich Quantum Valley. With the Max Planck Society, the Fraunhofer Society, the Bavarian Academy of Sciences and Humanities and the two universities of excellence LMU and TU Munich, the top researchers in quantum research are working together there to expand Bavaria's position as an outstanding science location in this future technology."

During a visit to the Ultracold Strontium Laboratory at the Max Planck Institute of Quantum Optics (MPQ), the Minister inspected a quantum simulator based on strontium atoms. The technology of this simulator is to become the hardware basis of a quantum computer developed in Munich Quantum Valley. "Quantum computers convince with a giant speed in information processing. The funding, which is part of the Bavarian technology offensive Hightech Agenda Bayern Plus, is intended to accelerate research in quantum technologies," said Aiwanger.

Quantum optics is one of the research priorities at the two Bavarian Max Planck Institutes for Quantum Optics (Garching) and for the Science of Light (Erlangen, MPL). The director of the MPL, Prof. Florian Marquardt, was pleased about the research funding: "Researchers in the Max Planck Society have already achieved important breakthroughs in the field of quantum technologies. These include groundbreaking work on quantum simulation with atoms, on the fundamentals of quantum computers and on quantum communication with light. Within the framework of Munich Quantum Valley, MPG research groups will cooperate closely with partners from industry, universities and application-oriented research."

The marriage of artificial intelligence and quantum technologies

Prof. Dr. Claudia Eckert, the director of the Fraunhofer Institute for Applied and Integrated Security AISEC, added: "Fraunhofer, with its transfer-oriented research work, is the ideal partner to bridge the gap between basic research, applied research and industrial use. Fraunhofer contributes comprehensive know-how in the field of quantum technology and quantum computing to the newly launched MQV projects - from the development of quantum algorithms, e.g. for solving optimisation problems, to the system integration of hardware. With the clear goal of harnessing quantum technology and quantum computing to solve the concrete challenges of industry."

At the MPI for Quantum Optics in Garching, research into the quantum world with laser light is the central topic. Researchers are developing powerful quantum computers, quantum simulators and quantum communication at this research site. The science in these areas ranks at the very highest level worldwide. One of the institute's core competencies lies in the research and control of ultracold atoms, which scientists are using as part of the Munich Quantum Valley to build a quantum computer on this basis.

Researchers at the MPL will marry two key technologies that are crucial for Germany's international competitiveness: Artificial intelligence and quantum technologies. With the help of neural networks, they are working on improving the reliability of quantum computers and thus making them ready for everyday use in industry and science. In addition, the experts at the MPL, the only Max Planck Institute in northern Bavaria, are developing infrastructure for quantum cryptographic processes to protect sensitive data of citizens, companies and government agencies from hacker attacks in the future, and are researching interfaces between different quantum systems.