Flore Kunst likes to manipulate formulas as if to stretch, twist and crumple – but only on paper and with her computer. The leader of a new research group at the Max Planck Institute for the Science of Light (MPL) in Erlangen uses advanced mathematical concepts like topology and from quantum mechanics to better predict why under certain conditions materials that are in contact with their environment conduct electricity on their surface but not in their interior – and how to use these strange effects in novel microchips or quantum computers. 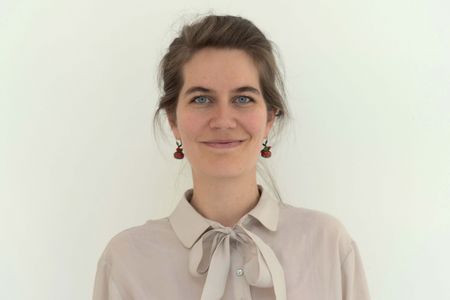 What is the difference between a mug with one ear and a donut? For Flore Kunst, there is none. “One can simply deform one into the other without having to close or open holes, tear, or glue”, explains the Dutch born theoretical physicist, who started her new research group called Non-Hermitian topological phenomena at the MPL in Erlangen on the first of November. She applies the mathematical discipline of topology to describe condensed matter and try to better understand how its properties change if one allows for dissipative effects.

“The importance of this mathematical toolbox in physics was realized in the 1980s and marked an important paradigm shift in the treatment of quantum systems”, says Flore Kunst, who was a Postdoc before at the Max Planck - Harvard Research Center for Quantum Optics at the MPI of Quantum Optics in Garching near Munich. This field of research has been awarded with not less than three Nobel Prizes in Physics both for theorists and experimentalists until today. An example for the application of this new perspective are topological insulators. They can only conduct electricity on their boundaries, whereas they are insulating in their interior. “How does this relate back to the story of the mug and the donut”, asks the scientist rhetorically. The answer: It is possible to manipulate the abstract math underlying these insulators in a very drastic way without changing the material properties, “they are extremely robust against perturbation”, describes Kunst.

Traditionally physicists like to describe a system under the assumptions that it doesn’t exchange energy or particles with its surrounding – it is somehow similarly isolated like the biblical hermit in a cave. “This trick usually greatly simplifies one’s computations“, says the new group leader. But in the real world like laboratory experiments, however, a material is always in contact with its environment. One way to describe this in theory is by allowing one’s model to be non-Hermitian, and considering the loss of energy to the environment. The term “Hermitian” is named after the French mathematician Charles Hermite. Kunst considers this in her models and her group deals with Non-Hermitian topological phenomena. Beyond this she is also looking for applications like in quantum computing or in optoelectronic devices.

As a theorist, who won several awards, she needs three things to work: a computer, pen and paper. Another very important aspect of her working day is discussing with colleagues and group members. “I absolutely love doing calculations”, she says. She already enjoyed this at a very young age, and mathematics was always one of her favorite subjects in school. But she didn’t study mathematics, “mathematics taught in school is very different from the mathematics taught at university”. She enjoys the computational part of mathematics the most, which is what she finds much more strongly in theoretical physics. “What attracts me to theoretical physics beyond the math, and especially to condensed matter physics, is its elegance”, Kunst explains. It never ceases to amaze her that lines of calculations that she wrote down actually predict something about the real world. “One can do very complicated calculations that actually predict the outcome of an experiment”, Flore Kunst tells. “As such, we can develop a deep understanding of how the world or even the universe works by simply writing down lines of equations.”