Everything you need to know about Cooperative Quantum Phenomena

The whole is greater than the sum of its parts: This ancient insight is all the more valid today at the level of quantum systems. Therefore, scientists from the Max Planck Institute for the Science of Light have written a hands-on tutorial aimed at – not only - young researchers to better understand the dynamic research field of cooperative quantum phenomena with focus on quantum optics, metrology and information. 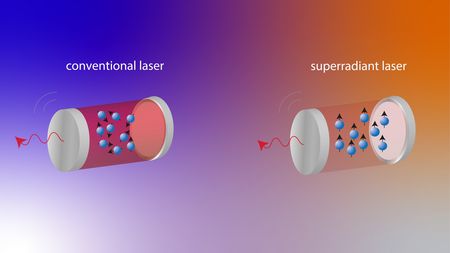 Graphic: Max Planck Institute for the Science of Light (1)

Some of the most intriguing phenomena in nature, both in the classical and quantum domains, are a product of cooperative effects, i.e., they cannot be understood by sole consideration of the individual constituents, as they arise from the interplay among them. Like nobody will comprehend a mechanical clock only by looking at its gears and springs. Already at the fundamental science level, finding solutions for many of those problems in the quantum domain poses a great intellectual challenge. Furthermore, there is an ever-increasing interest to build, control and harness complex cooperative platforms utilizing current experimental progress bridging the gap towards applications in emerging quantum technologies.

At the invitation of the prestigious journal Physical Review, the Cooperative Quantum Phenomena group of the Max Planck Institute for the Science of Light in Erlangen led by Claudiu Genes has provided a hands-on tutorial aimed at training young researchers in theoretical aspects necessary to partake in this dynamic research field. This work has been recently published as an open-access PRX Quantum Tutorial and illustrates many applications of cooperativity in the direction of topological quantum optics, in quantum metrology or in quantum information.

The tutorial is strongly connected to the recently established initiative  QuCoLiMa (Quantum Cooperativity of Light and Matter), which is a Collaborative Research Centre Transregio (TRR 306) of the universities Friedrich-Alexander University Erlangen-Nürnberg (FAU), Johannes Gutenberg University Mainz (JGU), and Saarland University (UdS) funded by the Deutsche Forschungsgemeinschaft. Many aspects relevant to projects comprising QuCoLiMa are detailed in this tutorial, such as, among others, subradiance of correlated quantum emitter ensembles, the occurrence of superradiant lasing in lossy optical cavities, cavity quantum electrodynamics with subwavelength quantum emitter arrays, the design of nanoscale coherent light sources etc..