By combining three imaging methods, scientists at the Max Planck Institute for the Science of Light in Erlangen and the Center for Molecular and Cellular Bioengineering at Dresden University of Technology have now succeeded in measuring mechanical properties of the cell interior with unprecedented precision - and in doing so, they have discovered some surprising phenomena. The new microscopy setup can help to better understand processes at the cellular level that lead, for example, to Alzheimer's disease or cancer. 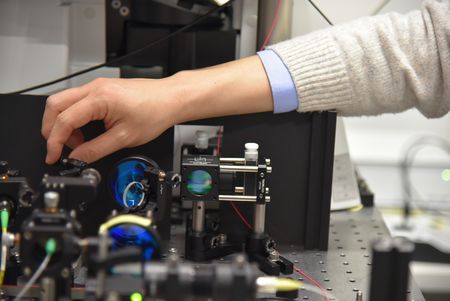 Foto: Max Planck Institute for the Science of Light (1) 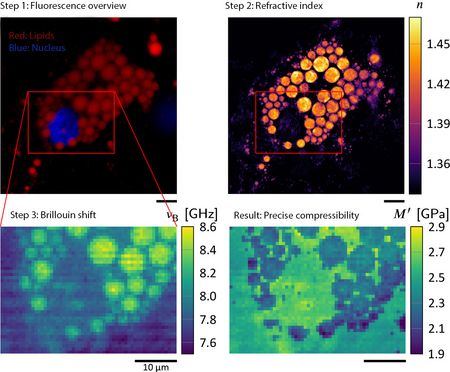 Image: Max Planck Institute for the Science of Light (2)

Mechanical properties of the cell interior and nucleus, such as compressibility and density, influence their function and are therefore important for our understanding of cell metabolism - in both healthy and sick individuals. These parameters help to analyze how cells behave during growth, or how cancer cells develop. However, an average human cell is just 25 thousandths of a millimeter in size, so researchers rely on microscopic methods to study them.

These optical methods have made great strides in recent decades. Brillouin microscopy, for example, allows the interior of living cells to be measured three-dimensionally and without contact. In simplified terms, the method detects how mechanical vibrations scatter light waves. However, in order to use Brillouin microscopy to accurately determine, for example, the compressibility of individual structures inside the cell or the even smaller cell nucleus, the researchers need to know their density and refractive index, i.e. how light is deflected. Until now, they had mostly assumed that the refractive index within a cell is homogeneous with a known value. If this is not the case, it can lead to incorrect measurement results.

Therefore, a team of researchers from the Max Planck Institute for the Science of Light in Erlangen and the Center for Molecular and Cellular Bioengineering at Dresden University of Technology, led by physicists Raimund Schlüßler and Kyoohyun Kim in the group of Jochen Guck, has developed a new microscopy method to more accurately determine local values for refractive index and density. To do this, they combined three methods in one setup: Fluorescence microscopy, optical diffraction tomography, and Brillouin microscopy - and called it FOB. While the former is used to identify the objects under investigation within a cell with the aid of fluorescent dyes, tomography determines their refractive index. They have recently published their results in the highly respected magazine "eLife".

Initial measurements with the FOB setup actually provide more precise values of mechanical properties of samples than was previously possible. The researchers were able to discover an unexpected phenomenon: the interior of the nucleus, the nucleoplasm, is less dense than the surrounding cytoplasm, and should therefore also be more compressible. However, surprisingly the opposite is the case. They now want to investigate further how this unusual combination, which is otherwise found in special materials used in architecture or spacecraft, comes about. Moreover, the researchers can precisely measure the compressibility of lipid droplets stored in adipocytes, also known as fat cells. The present research clearly shows that the compressibility of lipid droplets can be determined precisely only when their extraordinary refractive index and density values are taken into account from the FOB setup.

In the future, the new method will make it possible, for example, to measure the density and compressibility of the cell nucleus when cancer cells proliferate particularly strongly. Or when, for example, protein aggregates, or plaques, form inside the cell in the course of an Alzheimer's disease. Such studies may one day help to better understand the development and progression of these diseases.

(1) A movable Mirror enables the switch between Brillouin and ODT mode.
(2) A view of the different images this new setup can produce.