Scientists have for the first time accelerated microscopic particles backwards at the speed of sound inside hollow core photonic crystal fibre. A single laser pulse lasting only a quadrillionth of a second and containing a 90 billionth of the energy needed to boil a kettle, blasts material off the surface of the particle, accelerating it backwards at more than a million times gravity. The technique may allow the inner walls of hollow fibres to be coated with different materials at remote positions, allowing realisation of devices such as lasers, amplifiers, mirrors and wavelength filters. 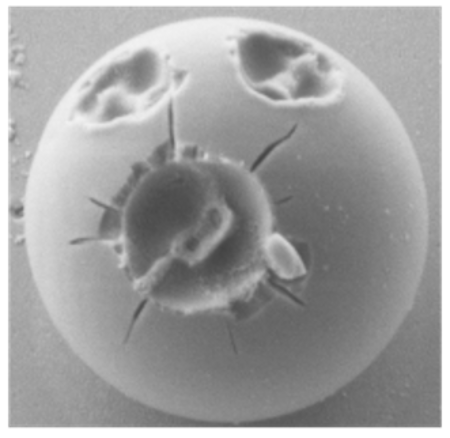 Image: Max Planck Institute for the Science of Light (1) 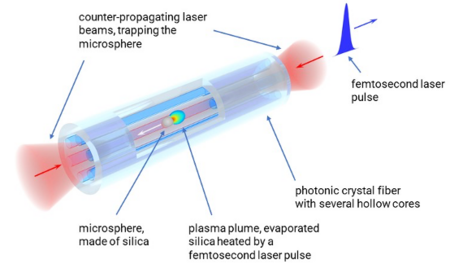 Image: Max Planck Institute for the Science of Light (2)

Single microparticles can be optically tweezered inside hollow-core photonic crystal fibre (HC-PCF) and propelled over long distances by two counter-propagating laser beams. This has been used to monitor PM2.5particles in the atmosphere, and to form flying particle point sensors capable of measuring radiation levels, temperature and electric field with high spatial resolution.

Now, Maria N. Romodina, a postdoc in the Emeritus Group of Philip Russell at the Max Planck Institute for the Science of Light in Erlangen, has studied the interaction of an optically levitated microparticle with a single femtosecond pulse inside HC-PCF.  The initial aim of this work, recently published in Optica, was to explore ablation or evaporation of a trapped particle as a means of coating the inside surfaces of the fibre locally with different materials. Romodina directed infrared laser pulses lasting only 40 femtoseconds (a quadrillionth of a second) into a HC-PCF containing a levitated silica microsphere of diameter a few microns. Acting as a microscopic ball lens, the microsphere focused the pulse energy on to its back surface, ionizing the glass and forming a hypersonic plasma plume that accelerated the particle abruptly backwards with a velocity close to the speed of sound. Viscous drag then brought the particle to a halt a few millimeters from its initial position. This novel effect has never been previously reported.

The hollow-core system uniquely allows the phenomenon to be precisely studied within a well-controlled micro-environment. The authors study how the initial particle velocity is affected by the particle diameter and the pulse energy. They also report how the system can be used to measure viscous drag as a function of air pressure in the core.

Using counter-propagating pulses to suppress particle motion, the technique may allow the inner walls of HC-PCF to be coated with a wide range of different materials at positions remote from the endfaces. “This would enable incorporation of devices such as lasers, amplifiers, special mirror types and wavelength filters”, explains scientist Romodina, “turning the fibre into a versatile instrument for science and technology.”

(1) Scanning electron micrograph of a 2.95 µm silica particle. Each of the three craters was ablated by a single femtosecond pulse.

(2) Schematic of a particle propelled in a hollow-core photonic crystal fibre by a femtosecond laser pulse.