Jochen Guck received the Wilhelm Ostwald Medal of the Saxon Academy of Sciences and Humanities in Leipzig, which is usually awarded annually to a scientist in recognition of outstanding scientific achievements. 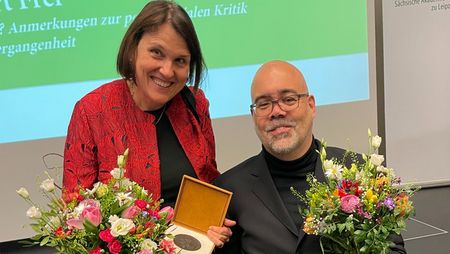 With his department, Guck investigates the physical properties of living cells and tissues using novel photonic and biophysical tools to test their biological significance. The goal is to use the findings for improved disease diagnosis and the further development of regenerative medicine.

During his research career, he made a significant contribution to the current global leadership position of the Peter Debye Institute for Soft Matter Physics in Leipzig. In 2012, he was awarded the Alexander von Humboldt Professorship for Cellular Machines at the Biotechnology Centre of TU Dresden, where he served as Executive Director. He made significant contributions to Dresden's excellence in the life sciences and initiated important spin-offs and industrial collaborations in Leipzig and Dresden. Since 1 October 2018, he has been Director at the Max Planck Institute for the Science of Light in Erlangen.

Wilhelm Ostwald was one of the founders of physical chemistry. He taught at the University of Leipzig from 1887 to 1905 and was awarded the Nobel Prize in Chemistry in 1909. From 1887 he was a full member of the Mathematical and Scientific Class of the Saxon Academy of Sciences.