Girls`Day 2022 at the Max Planck Institute

What is the daily work of a scientist like? How does one become a physicist? And what does our mechanic actually do? The Max Planck Institute opened its doors on 28 April 2022. 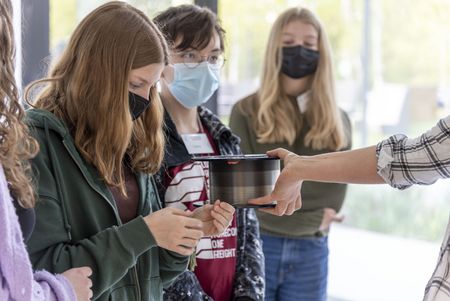 14 female students from grade five onwards had the opportunity to learn about careers at a research institute as part of Girls' Day. They spent the day at the Max Planck Institute and immersed themselves in the world of science and technology.

How is a glass fibre actually made? In the cleanroom, there are three large fibre drawing towers in which very special fibres are made from glass in elaborate manual work. The visiting students were given an insight into this key technology, which enables researchers to carry out special experiments, and learned how photonic crystal fibres are produced.

On this annual day of action, female students learn about professions or fields of study in which the proportion of women is less than 40 percent. Companies and universities all over Germany open their doors to girls on Girls' Day to introduce them to apprenticeships and courses of study in IT, crafts, natural sciences, and technology. Alternatively, they have the chance to meet female role models in leadership positions in business and politics.

Since the start of Girls'Day in 2001, companies and institutions have offered a total of more than 150,000 events with places for around 2 million girls.