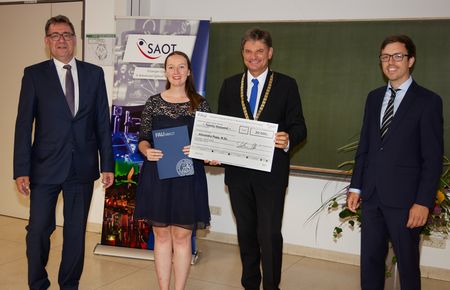 The award is associated with a funding of 20.000 Euros for an innovative blue sky research proposal in the field of optics and personal prize money. The award was presented by Prof. Joachim Hornegger, President of FAU, Prof. Stefan Will, Director and Co-coordinator of SAOT and Dr. Max Gmelch, Coordinator SAOT. Since 2006, the Erlangen Graduate School in Advanced Optical Technologies (SAOT) acts as an interdisciplinary hub for research on photonics and optical technologies in Erlangen.

Here at MPL, Alexandra Popp works on quantum communications as well as Brillouin scattering - an interaction between optical and acoustic waves. In her PhD project, she researches novel applications for localized light-sound interactions which led to the idea for the research proposal. Alexandra says, “We discovered a promising blue sky application for our method of localized Brillouin interactions and are excited to be able to realize it funded by the SAOT Innovation award.” She is part of two groups at MPL: Quantum Optoacoustics (Birgit Stiller) and Quantum Information Processing (Christoph Marquardt).

As part of Friedrich-Alexander-Universität Erlangen-Nürnberg (FAU), SAOT provides an education program of excellence for national and international doctoral candidates, including workshops, seminars, and academies. Furthermore, SAOT increases the scientific outreach to the general public and coordinates joint applications on research funding in the fields of photonics and optical technologies.