Diagnosis and therapy of ME/CFS: What can we learn from Long Covid? 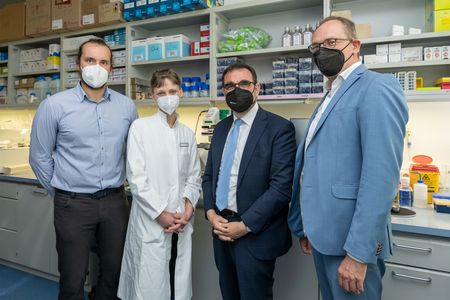 On Thursday August 4, 2022, Klaus Holetschek, the Bavarian Minister of State for Health and Care and Bernhard Seidenath, the chair of the committee for health and care in the Bavarian parliament, visited the Department of Ophthalmology (director: Prof. Dr. Friedrich E. Kruse) at Universitätsklinikum Erlangen to find out about the current status of research into ME/CFS conducted there.

PD Dr. Dr. Bettina Hohberger, molecular medicine expert and opthalmologist at the Department of Ophthalmology at Universitätsklinikum Erlangen, and Dr. Martin Kräter from the Max Planck Institute for the Science of Light presented the benefits of their work for people suffering from ME/CFS (myalgic encephalomyelitis/chronic fatigue syndrome) to the politicians. The researchers from Erlangen have proven that there are objectively measurable parallels between Long Covid and ME/CFS. “Together with Dr. Gerd Wallukat from Berlin Cures GmbH, we have identified two functionally active GPCR autoantibodies that are also found in people suffering from Long Covid, M2-AAb and β2-AAb, in people suffering from ME/CFS,” explained Dr. Hohberger.

ME/CFS is an acquired, severe organic multisystem disease that leads to severe pathological fatigue (mental and physical) after physical or mental exertion. “ME/CFS is often triggered after a viral infection, for example in connection with the Epstein-Barr virus or after contracting influenza. Some of those who contract Covid-19 will go on to develop ME/CFS as a severe form of Long Covid,” explained Bettina Hohberger. This is one of the similarities it shares with Long-Covid syndrome, which is caused by the virus SARS-CoV-2. No specific organic defects are apparent in either of the illnesses.

The researchers from Erlangen have succeeded in detecting two autoantibodies M2-AAb und β2-AAb that are found in patients suffering from Long Covid in patients with ME/CFS. They have also found the first indication of changes to blood cells that may have an effect on microcirculation. The MPL team led by Prof. Jochen Guck and Dr. Martin Kräter has developed a new technology to measure cells for these investigations. Blood cells are sent through a narrow channel at high speed and recorded by a camera. Software then determines which cell types are present and how deformed they are. With this method, the researchers can record and measure up to 1000 cells per second.

Based on this discovery and following on from treatment attempts using Aptamer BC 007 (Berlin Cures GmbH, Berlin), Dr. Hohberger began to treat a patient who had been suffering for some time from ME/CFS with BC 007. According to the patient, her symptoms improved over a number of months. First of all, she noticed a reduction in cognitive complaints such as brain fog, lack of concentration and short term memory limitations, followed by improvements in her sensitivity to noise and light. Over a period of several months, she noticed an improvement in fatigue, weak muscles and PoTS, or postural orthostatic tachycardia syndrome, that can lead to heart palpitations and dizziness in ME/CFS patients whenever they stand up. Motivated by this initial success, the researchers from Erlangen would now like to check their diagnosis methods and treatment approach for a larger number of patients suffering from ME/CFS.

It is estimated that approximately 250,000 people suffer from ME/CFS in Germany, and numbers are on the rise. “It is particularly young people between the ages of 11 and 40 who are affected by this disease that we still do not really understand. With our research, we aim to do all we can to help those affected. And I am optimistic that we will succeed if university medicine, politicians and the pharmaceutical industry all pull together,” urges Bettina Hohberger. “Until now, we have only been able to help one patient. What we now need are scientific investigations involving many more patients. For this reason, we would like to extend our research into Long Covid to include a clinical study with people suffering from ME/CFS that could give us an initial indication of the mechanisms behind the effects of BC 007 on this condition,” explained Dr. Hohberger.

Bernhard Seidenath thanked Dr. Hohberger and her team of researchers. “Chronic fatigue syndrome ME/CFS has a unique and devastating impact on patients’ quality of life. Research at Universitätsklinikum Erlangen provides all of those affected by ME/CFS with a glimmer of hope. We are all keen to raise awareness of the disease, to improve patient care and to encourage increased collaboration between researchers in Bavaria. For this year alone, we have allocated an additional 1.6 million euros in the state budget especially for this purpose.